Tired of reproducing asexually? Fed up with dividing like some simple one-celled organism? Well, wait no longer, because now Critters can get it on. 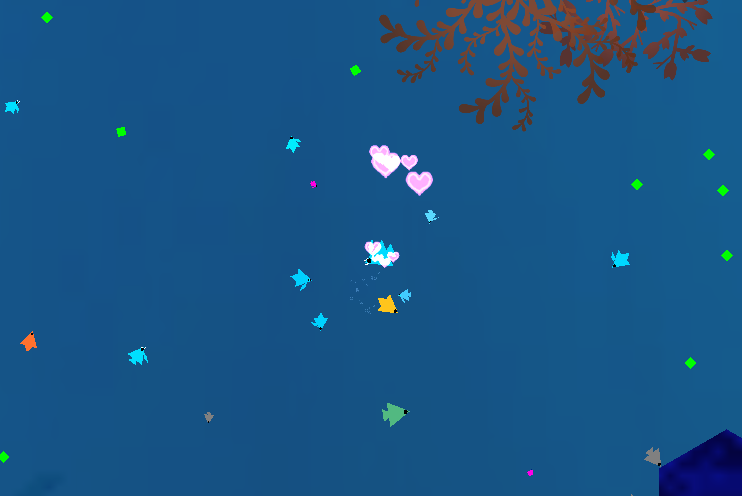 As of this release, mature Critters in close proximity to each other may reproduce by combining their traits and neural networks to create new hybrid offspring. Watch for little explosions of hearts!

This release also includes some tweaks designed to help promote the evolution more robust behaviors. I've already seen some success; I've finally seen my first example of a Critter naturally evolving some limited vision-based food seeking behavior (albeit only if the food is on the correct side!) -- meet "Righty." This critter is capable of not only avoiding obstacles visually, but if it gets close to a piece of food on its right side, it will turn and grab it! You can download this little guy and add him to your simulation to see for yourself.

The biggest update: Critters' vision algorithm has been improved significantly. Critters still use five total sensory neurons for vision (three for a gestalt of the colors they're seeing, and one each for the size and angle of the nearest object) but they are now much better at keeping track of what is and isn't in view. As a result, vision-based evolutionary pressures can be much stronger.

Additionally, instead of remaining in a static location when they spawn, food particles will now drift about in a semi-random motion as if with a "current." Significantly, this motion causes them to generally move away from other objects (including hungry Critters) which should promote the evolution of behaviors that actively seek out food rather than simply drifting around hoping to filter-feed. 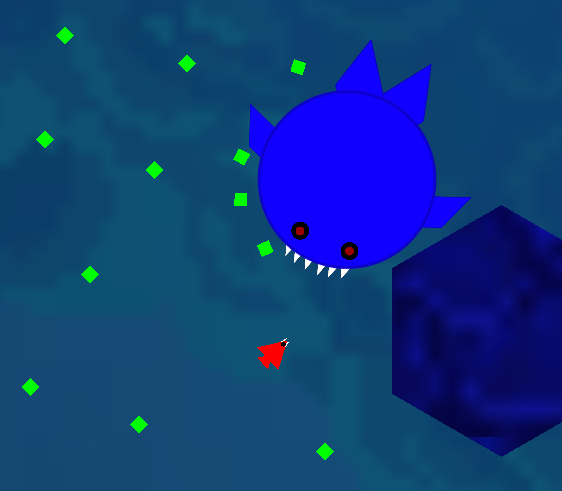 Finally, as a sort of "beta" experiment/easter egg, I've gone ahead and thrown in something I've been working on but haven't decided if I want to keep  in the game -- an optional "Super Predator" AI that relentlessly hunts down any critters it finds. They're pretty dumb, and I'm not sure yet how much they add to the game, but I figure why not!

If you want to try it out, just press "C" t o add one to your stage. (If these are ever made a more permanent feature they'll get their own button in the UI and all that.) They're completely pre-coded, not driven by neural nets, and serve just to control population and add some additional evolutionary pressure. If you want to get rid of one you've already added, just use the existing Delete Tool or middle-mouse shortcut.