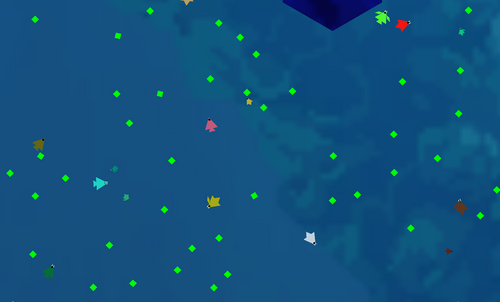 This update contains a couple small-ish changes, but one of them in particular has a big impact.

That's a new button on the main menu bar: "Merge Pops". This is a tool to allow you to bring Critters from one save to another en-masse.

Often, the conditions in a simulation lead to one fairly dominant line of Critters more or less monopolizing the sim. It becomes very difficult to inject new variety into the gene pool. But what if you could grab a huge handful of Critters from an equally successful population and allow them to compete, interbreed, and generate diversity? Well, now you can!

But what if your level is already full? Or the level you're merging has 300 Critters and your cap is 150? Well, if the total of both populations adds up to more than your current max setting, the merge process will attempt to achieve a roughly 50/50 mix.

Secondly, a minor change that will make things a little more colorful. When NeuraQuarium started out, there were three things in the world: Red Critters, Green Fruits, and Blue Blocks. Critters have visual neurons for detecting each of these three colors, so that worked out pretty well.

The point being, it didn't really make sense to have every "Basic" critter template be red anymore. For one thing, it slowed down the evolution of non-red colors. For another, it made tracing lineage by color more difficult because even completely unrelated clades all had the same starting color. So, as of now, all Basic starting Critters spawn with a randomly generated color.  That should make the early game a little less samey and more visually diverse, as well as making early evolutionary lineages more apparent.

I have seen the evolutionary advantage of being tge same colour as the walls, but one of the things I have yet to spot in the weeks playing this is a meat-eating line evolving to be the colour of the grass to attract any passing herbivores a bit nearer :)