This is a pretty HUGE update, so let's break it down! The biggest changes first:

Since the beginning, NeuraCritters have been limited in physical diversity to some very basic stats: size, speed, strength, diet, and color. Colors were expanded to include secondary colors and patterns, and temperature preference was added, but still, there wasn't a lot of room to differentiate or specialize.

In addition to size, diet, ideal temperature, and reproduction commitment ("parenting"), Critters now have TWELVE separate individual statistics which determine their abilities. These are split across four general categories, each of which follows its own set of rules.

Many of these traits have a "Minimum Expression Value" -- if the stat is lower than this number, the Critter won't have the trait. The higher the stat is, the more powerful the effect.

With so much added complexity to our Critters, expect ongoing balancing on these traits going forward.

Speaking of stats! You can now edit all of a Critter's stats in-game. With a Critter selected, just click the "Unlock" button to the left of the information panel and handles will appear on the editable stat sliders. Go nuts. Make a tiny vampire parasite or an enormous whale. 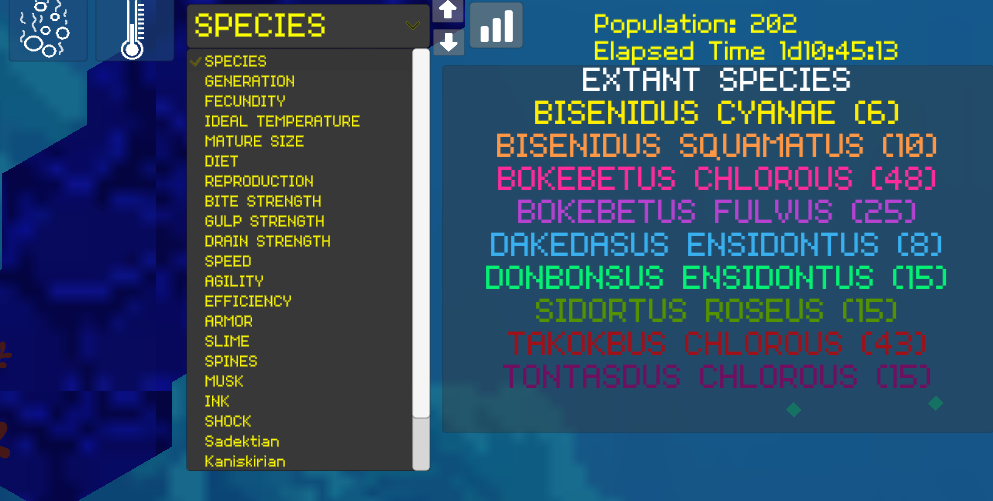 The top of the window was getting pretty crowded, and there was DEFINITELY not going to be room for a whole new set of buttons for charting ALL those new stats. So now there's a simple dropdown menu that provides the same functionality. Hover over any item in the list and the chart will update to show that information. Click an item in the list to "lock" that view even after you close the list. Hit the little graph button to the right of the list to toggle that lock on and off.

Another neat thing about a dropdown for charting/highlighting info -- now we can add new items to chart dynamically! Any tags you've applied to lineages through the Taxonomy view will appear in the list, allowing you to highlight the living Critters with that tag and see some basic information about the lineage. 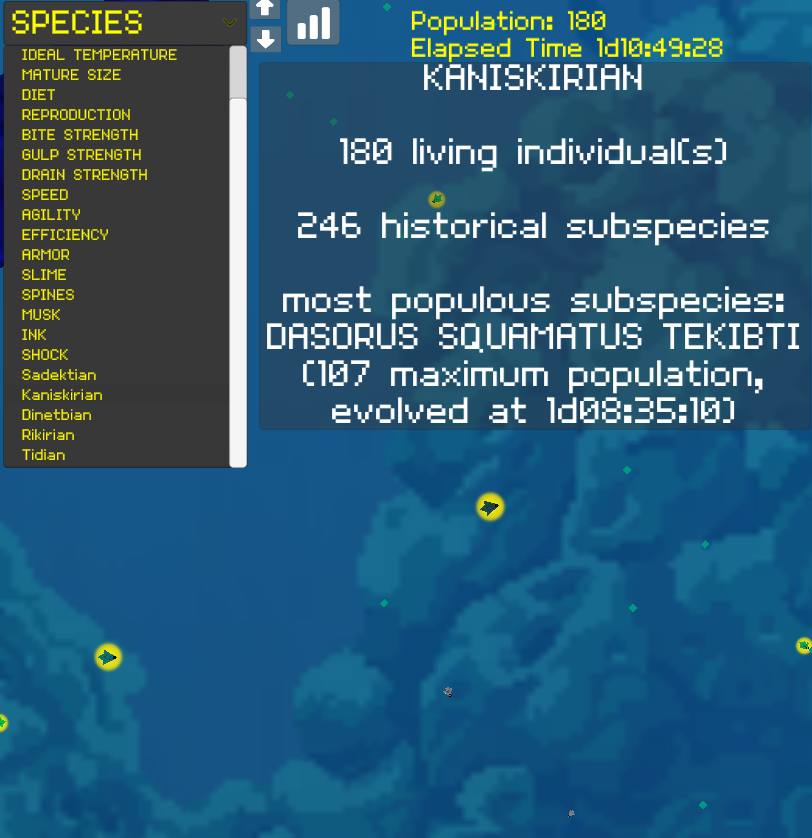 A fourth type of Synapse is now available to evolve or for you to create in NeuroSurgery mode: Multiplier.

As it sounds, this Synapse type will amplify or dampen the Neuron it's connected to, multiplying the target neuron's state by a value equal to the Synapse's strength times the state of the origin neuron. (If more than one Multiplier connects to the same target, their multipliers are added together before being applied to the target.)

Other Tweaks and Bug Fixes

Thanks for reading! If you create or evolve any unique Critters, share them with the Discord!

What's the version numbering scheme? This feels more than a slight update to 1.162 which is what calling it 1.665 implies :)

Haha, the numbering scheme is kind of whatever. As the numbers get higher they are tending to increment more slowly (I never want to run into being at 1.99999999..

The only thing that really matters is that the numbers be distinguishable to the Version Migrations system.

Speaking of which: Another change in this version is a Migration that will automatically assign Agility, Armor and Slime to your existing critters from previous versions, based on their Speed and Strength stats.